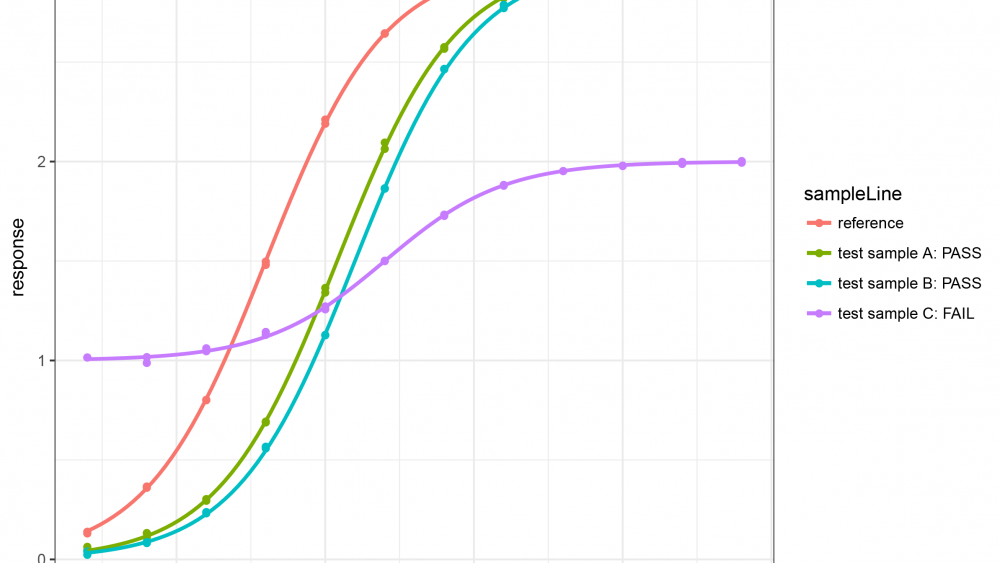 The blog assumes a cell-based assay analysed on a plate, but the comments also apply to animal-based assays.

The purpose of a bioassay is to measure some unknown characteristic of a sample, usually its potency relative to a reference standard (relative potency ) or the concentration of the sample. This can only be done correctly if the assay functions in the way the analyst expects.

Suitability tests are there to make sure that the entire assay and analysis process are indeed functioning as expected.

There are two types of suitability tests: system suitability tests and sample suitability tests. These serve fundamentally different purposes and it is important not to mix them up. Some of the problems that can arise if they are confused are discussed in our blog here – Inadvertent Consequences of Following a Guideline – European Pharmacopeia 9.2 section 5.3.

System suitability tests
When using a bioassay, the first step is to check that the assay system, i.e. the biology and biological response measurement, is working correctly.

System suitability tests check that the  assay is working correctly as a measurement system.

To do this, it is usual to examine the response of the assay to samples with known properties.

Broadly speaking, if the Reference has not changed it should always produce roughly the same dose-response curve in the same assay. Therefore, system suitability tests based on the dose response curve parameters – slope, asymptotes or intercepts – can be used to check that the Reference is behaving as expected. If these are not within expected ranges, then either the Reference has degraded, or the assay system is not functioning correctly.

Quality Control
The Quality Control (QC) sample has known relative potency and should, by definition, be biologically similar to the Reference. Thus their dose-response curves should be parallel, wherever they are physically placed on a plate.

If the Reference is performing correctly but the QC is not parallel to it, then either the QC sample has degraded, or the assay wells used for the QC are not responding correctly.

Parallelism of the Reference and QC primarily tests whether the plate responses are correct for the QC.

Tests on the Test article are known as Sample suitability tests and check that the Test items are behaving as expected.

The most important of these is parallelism of the Test items and Reference.

A lack of similarity is more likely for a Test article than for the QC, since it is possible that the Test article is biologically different from the Reference standard (for example, it may contain additional components, or be a biosimilar).

Learn more about non-parallelism and biosimilars in our specific blog here.

So parallelism tests are necessary.

Is it this simple?
Well no, not really! In the end, all the substances on the plate (Reference, QC, Test articles and others) require the wells in which they are placed to be working correctly, so these suitability checks all cross over to some extent. But keeping in mind the fundamental concepts outlined above helps sensible plate maps to be designed. For example, it is probably unwise to place the Reference in the middle of a plate and the QC on one edge – this may well result in failure of the System suitability criteria and thus the whole plate. Better to have a Test article in the edge position, that way perhaps only one sample fails, and not the whole plate. Alternatively, compensate for the edge effects, or miss out the edges altogether. (Read more about edge effects in our blog here).

How many tests to use?
In summary, the purpose of suitability tests is to check for unexpected (but possible) behaviour that could affect the relative potency or concentration calculation. Not every possible behaviour needs to be tested for – it is enough to test for things that might plausibly happen and that would affect the reportable value.

Carrying out too many suitability tests can be counter-productive – it will increase the chance of the assay or Test article failing, without necessarily providing any benefit. However, enough tests should be carried out to give confidence that nothing unexpected is happening. A possible set of suitability tests which will catch most common problems is the following:

*There are a wide variety of parallelism tests. In general, where there is enough data to decide upon the appropriate limits, equivalence testing is recommended. A more in depth discussion can be found here.

In our next blog we will look at setting limits for system and sample suitability criteria. Sign up to make sure you receive it as soon as it is released.