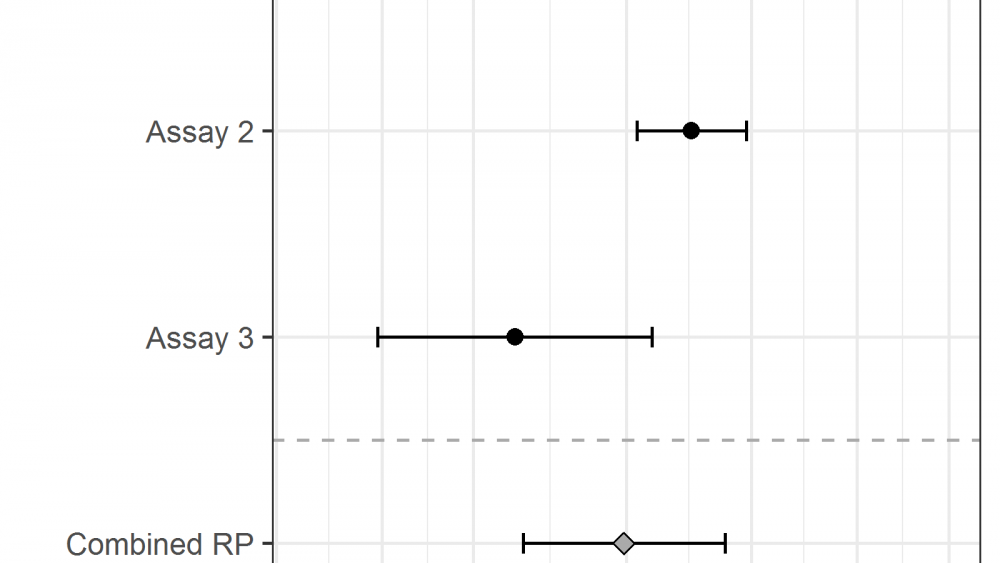 How to Combine Relative Potencies for Bioassay

It often happens that the precision required from a relative potency (RP) bioassay cannot be achieved using a single plate. In this situation the usual approach is to repeat the assay two or more times[1]. Each run of the assay will give a separate relative potency result. These are then combined to give a single “reportable value”. This is supposed to be our best estimate of the true relative potency, given the individual measurements we have – but how exactly should it be calculated?

Both the USP (in section 4 of Chapter 1034) and the PhEur (in section 6 of Chapter 5.3) give guidelines for how to combine RPs. Each guideline discusses three methods – these have different names in the two guidelines, but are in fact very similar (although there are some differences which we’ll discuss).  In this blog we’ll discuss the pros and cons of each and how to choose the most appropriate method.

Let’s examine an example in order to illustrate the effects of the three methods.

In this example, assay 3 is much less precise than the other two assays. The relative potency also happens to be lower.

Below we show the results of combining the relative potencies of three assays using each of the three methods. For each method the three RPs are shown above the dotted line, with the error bars showing the 95% CIs; the wider the error bar, the less precise the measurement. The combined RP and its 95% CI is shown below the dotted line in each case. 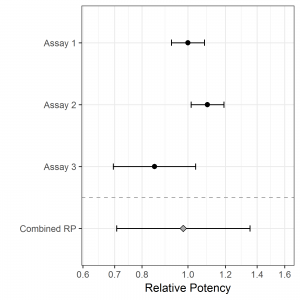 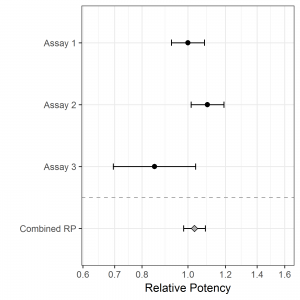 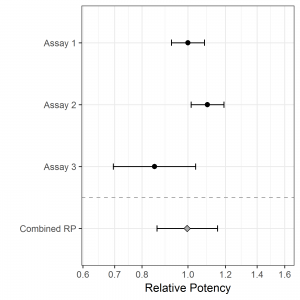 Method 1, unweighted combination, takes all three relative potencies into account equally, so the combined RP ends up being quite low – in fact, it is below the RPs for assay 1 and assay 2. But this does not seem quite right, because,  assuming the assay is unbiased, we would expect that the more precise measurements, assays 1 and 2, are closer to the true RP, so the true RP is more likely to be somewhere between them.

The confidence interval for the combined result is also influenced by assay 3, making it (possibly) too wide in this example.

Method 3, weighted heterogeneous combination, also gives more weight to more precise results.  Unlike method 2, the confidence interval takes account of the assay-to-assay variation as well as the individual confidence intervals.  In this example, this would appear to be the most reasonable solution.

Which method is best?

It looks like Method 3 (the weighted heterogeneous method) takes everything into account – so should we always use it and forget about the other two? Possibly, but because it takes into account inter-plate variability, it gives CIs that are wider than those calculated by the weighted homogenous method. This is OK if there is real inter-assay variation, when it is appropriate for the CIs to be wider to reflect this. However, if in fact there isn’t any inter-assay variation, it could lead to unnecessarily wide CIs.

On the other hand the unweighted method should never be used – it completely ignores the precision of the individual assays so can give very misleading CIs. It has been included in our QuBAS software simply because it is in the guidance.

Finally, a word of warning about the methods as discussed in the USP and PhEur. – note this has been fixed in the latest version of the guidance, but the error still exists in older versions.

During the development of the combining RPs module for our bioassay software QuBAS, we found that some aspects of the USP and PhEur guidance on this are incorrect. The problems arise in the calculations for method 3. The two methods give different formulas for calculating the inter-assay variation. The formula in the PhEur is incorrect: it does not account for the intra-assay variation, and is smaller by a factor of N (the number of assays) than it should be. This can lead to a severe underestimate of the inter-assay variation, which will lead to a CI for the combined RP that is too narrow.

The formula in the USP is generally correct, but it can cause problems in some situations. The formula given is:

– S being the standard deviation of the log RPs

All of this links with format variability as described in the USP chapter on assay validation (1033). In our next blog, we’ll write more about assay validation from a statistical point of view.

[1] Adjusting for plate effects, often known as row and column or edge effects, may help precision. See our blog