Many of our readers will be familiar with our paper “Parallelism in Practice” (PDA Journal of Pharmaceutical Science and Technology, 2015) and how we examined the common methods used for evaluation of parallelism for bioassay. In this blog we’ll explain why the usual way of thinking about parallelism doesn’t always make sense when dealing with biosimilars; we’ll discuss why this is and some alternative ways of approaching parallelism.

First let’s briefly review the usual approach to parallelism. The aim of a potency assay is to calculate the relative potency (RP) of a test sample compared to another sample, called the reference standard. The RP is assumed to be the same at all response levels.

We would generally expect that parallelism tests will usually pass if the assay and samples are behaving normally. If the parallelism test passes, we continue to the next step: fitting a parallel model and calculating the RP.

If a parallelism test fails, this is generally taken as a sign that something is wrong (for example, the test sample may have degraded), and so usually no RP would be calculated if this happens.

For some bioassays involving biosimilars, the situation may be different.

Biosimilars are copies of licensed biologic drugs (Reference Medicinal Products (RMPs)). A biosimilar manufacturer is likely to have a different manufacturing process (e.g. different cell line, raw materials, equipment, processes, process controls and acceptance criteria) from that of the RMP and no direct knowledge of the manufacturing process for the RMP.

Since biological products are complicated, these manufacturing process differences mean that a biosimilar is unlikely to be completely identical to the RMP. In order to be approved it must however be highly similar in both physiochemical and biological terms, with no clinically meaningful differences that could potentially impact the purity, safety or efficacy of the product. However, there are still likely to be minor differences which have been judged to be clinically insignificant.

Now let’s think about the impact of this on parallelism: in a bioassay in which the biosimilar is being compared to the RMP, there is no reason why the two substances should behave exactly as dilutions of each other – they are different materials after all. Therefore their dose-response curves may not be parallel.

Any lack of parallelism is interesting in itself and will feed into an assessment of biosimilarity, but it will also affect calculations of RP. If the non-parallelism is substantial, the assay will fail any reasonable parallelism test. This means that if we follow the usual approach, we would not be allowed to calculate the RP.

We might try to get around this problem by changing the parameters of the parallelism test to increase the pass rate. For example, for an equivalence test we could set very wide gateposts, or for an F-test we could set a very low critical p-value. We would then be “allowed” to fit a parallel model and calculate an RP. However, if we did this we would be using a parallel model that is a very poor fit to the data – and using a poorly-fitting model will always lead to unreliable conclusions. So any RP calculated like this would be meaningless. It would also beg the question of what the point of the parallelism test is if it is set up to pass very non-parallel data.

A better way to deal with this is to accept that the dose-response curves really are non-parallel, and to report measures of potency that take this into account. We’ll explain how this works by showing how we applied this idea to some real data.

The assay we were looking at was an enzyme linked immunosorbent assay (ELISA) used as a surrogate for measurement of antibody-dependent cellular cytotoxicity (ADCC) activity, and  included Product 1 , the RMP, and Product 2, the biosimilar. The dose-response curve for both materials followed a four-parameter logistic. However, the curves were clearly non-parallel; the right asymptote for Product 1 was substantially higher than for Product 2. An example assay is shown below – you can clearly see that the curve for Product 2 (in green) levels off at a lower value than the curve for Product 1 (in black). 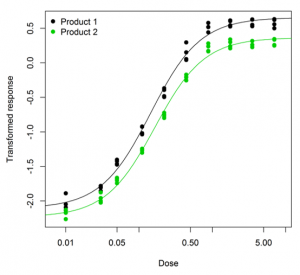 We saw the same pattern across all the assays we looked at (there were 20 in total). So fitting a parallel model clearly wouldn’t make sense. Instead we fitted a partly parallel model. What do I mean by “partly parallel”? This is easiest to explain by going back to the equation for the four-parameter logistic described in our earlier blog.

Here x = ln(dose), y is the response, and the parameters have the following interpretations: A and D are the left and right asymptotes (corresponding to zero and infinite doses respectively), C is the midpoint or ln(EC50), and B is the slope parameter, as shown below. 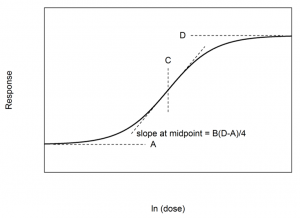 In model AB there are two differences between the dose-response curves: the C parameters differ, and the D parameters differ. Therefore the difference in potencies cannot be condensed into a single value. Instead, we used the following pair of values: 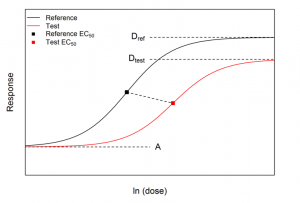 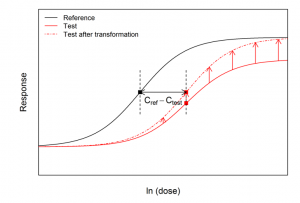 This blog was developed from work we have done on the poster “Statistical approaches for reporting potency of Biosimilars” presented at BioPharmaceutical Emerging Best Practices Association Conference 2015 September.