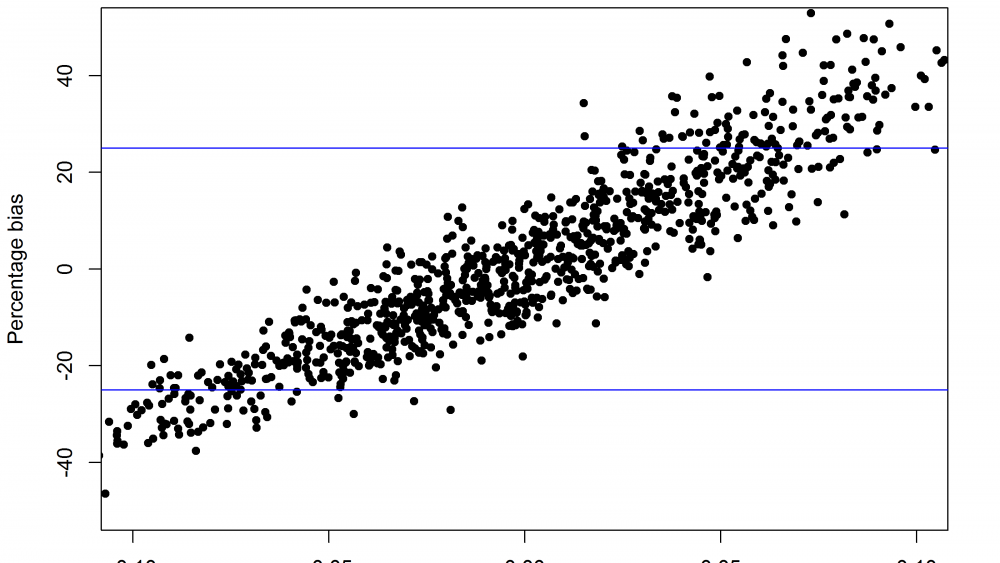 How to Set Suitability Criteria for Relative Potency Bioassays

There is fairly detailed guidance on how to set limits for suitability tests in Chapter 1032 of the United States Pharmacopeia (USP) [ref]. Four methods are discussed – we’ll show examples of each of these below. The discussion in the USP is only about parallelism, and we will also use parallelism in our examples below, but in fact these methods can be applied to any suitability test, including both system and sample suitability.

The first two methods (“a” and “b” in the USP) use only “good” historical data, where the assay and samples were behaving as expected (of course, you never really know this for certain, but you have to start somewhere…). For parallelism, a potential source of “good” data are assays where the reference standard was tested against itself, as these should certainly be parallel.

The simplest to understand is method “a”. Here’s how it works if the measure of non-parallelism is ΔA: 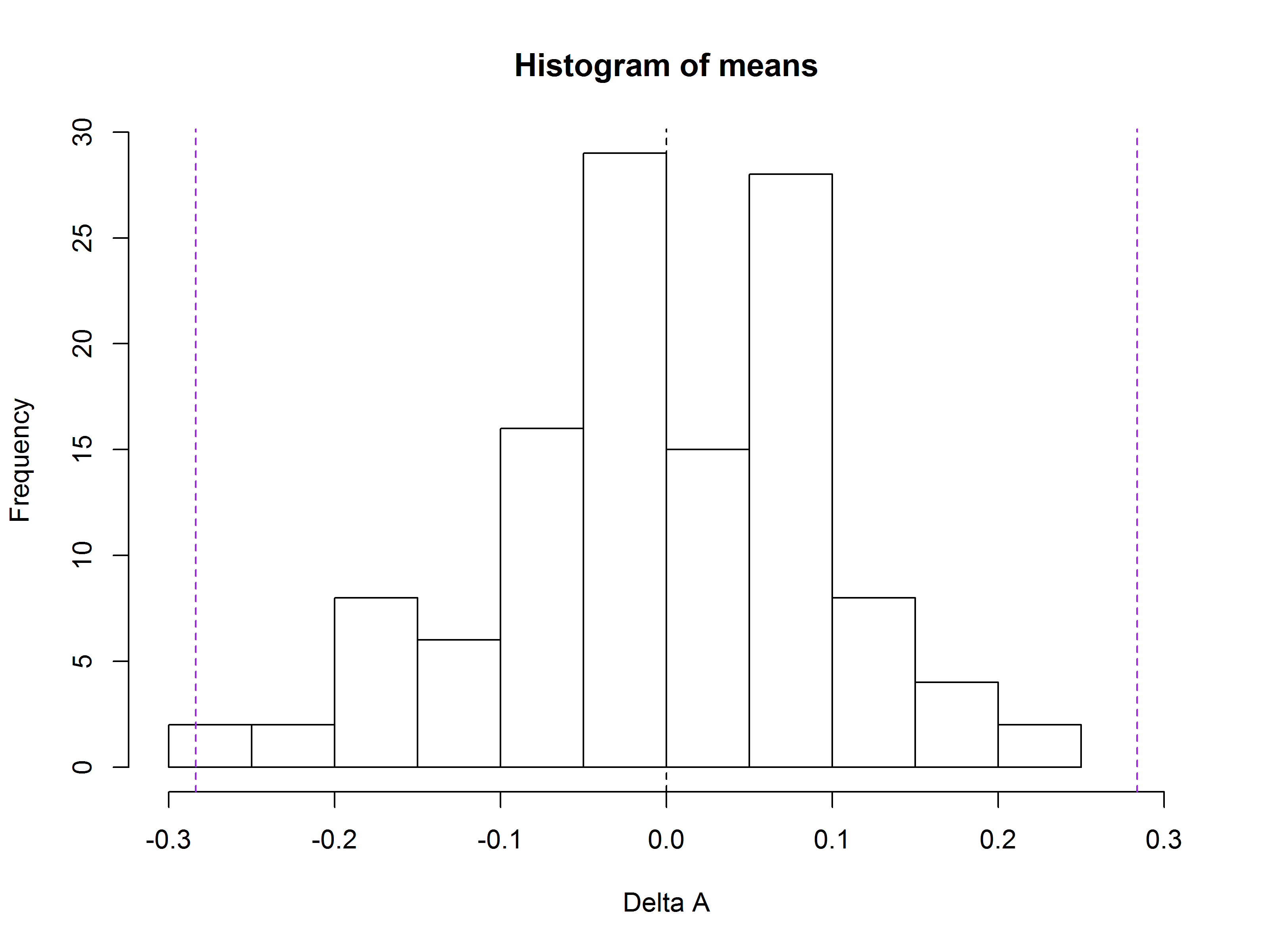 The process for method “b” is very similar, but everything is done for the 90% CIs for ΔA, rather than for ΔA itself:

Compared to method “a”, this method also has the advantage of accounting for the uncertainties on the ΔAs. 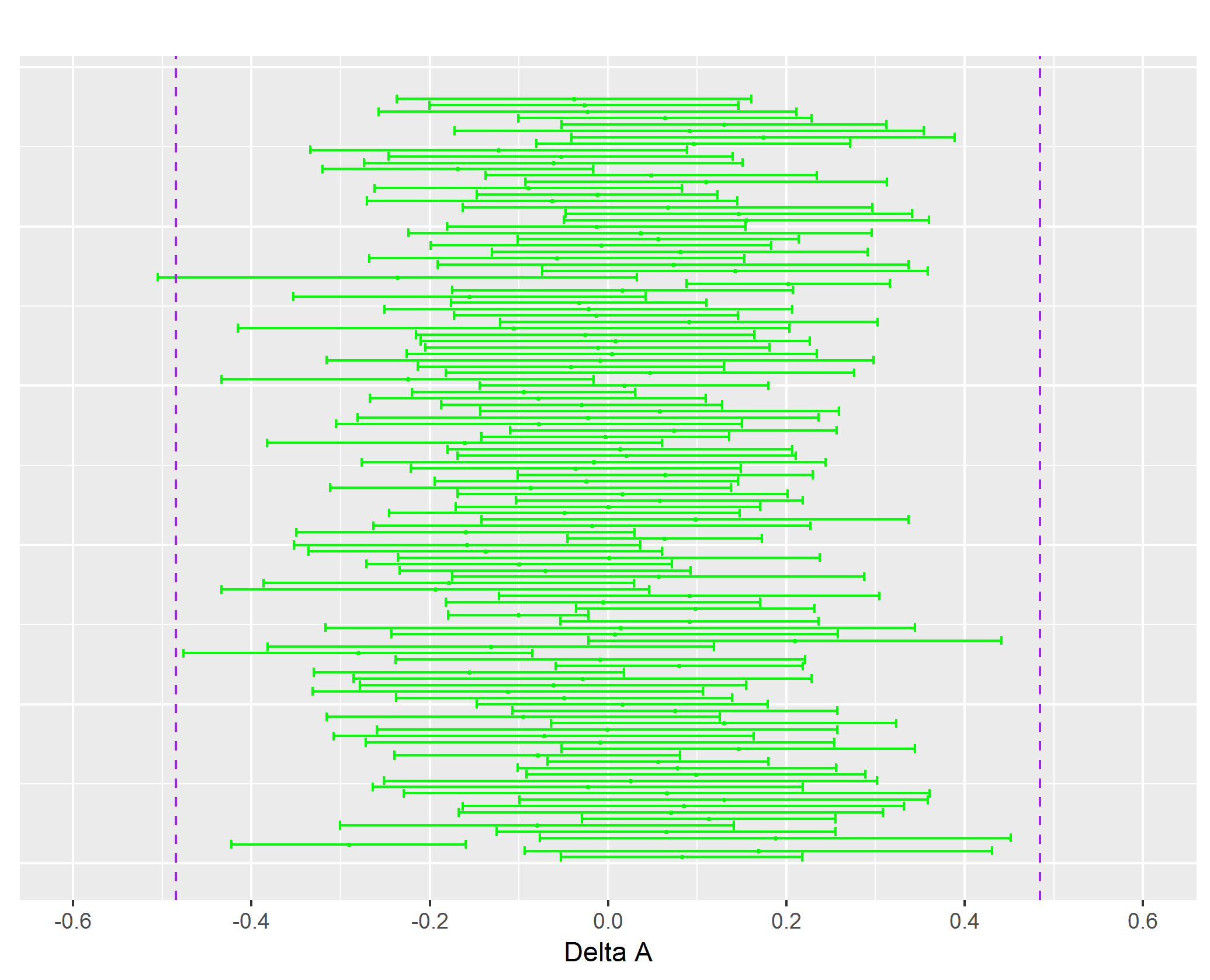 Methods “a” and “b” both rely entirely on “good” data. This means that there is no guarantee that they will do what suitability tests are supposed to do – reject assays or samples which aren’t behaving normally.

Method “c” tries to remedy this by additionally incorporating data from assays or samples that should fail. This “bad” data could include, for example, degraded test samples. The suitability limits are then set so that most of the good assays or samples will pass, while most of the bad ones will fail.

An example is shown in the figure below and is constructed using the same “good” data as we looked at for method “b”, but adds data from 10 “bad” reference-test pairs (shown in red). ΔA is consistently larger for the “bad” data, so it is easy to set a limit (the purple line on the right) which distinguishes between good and bad test samples. 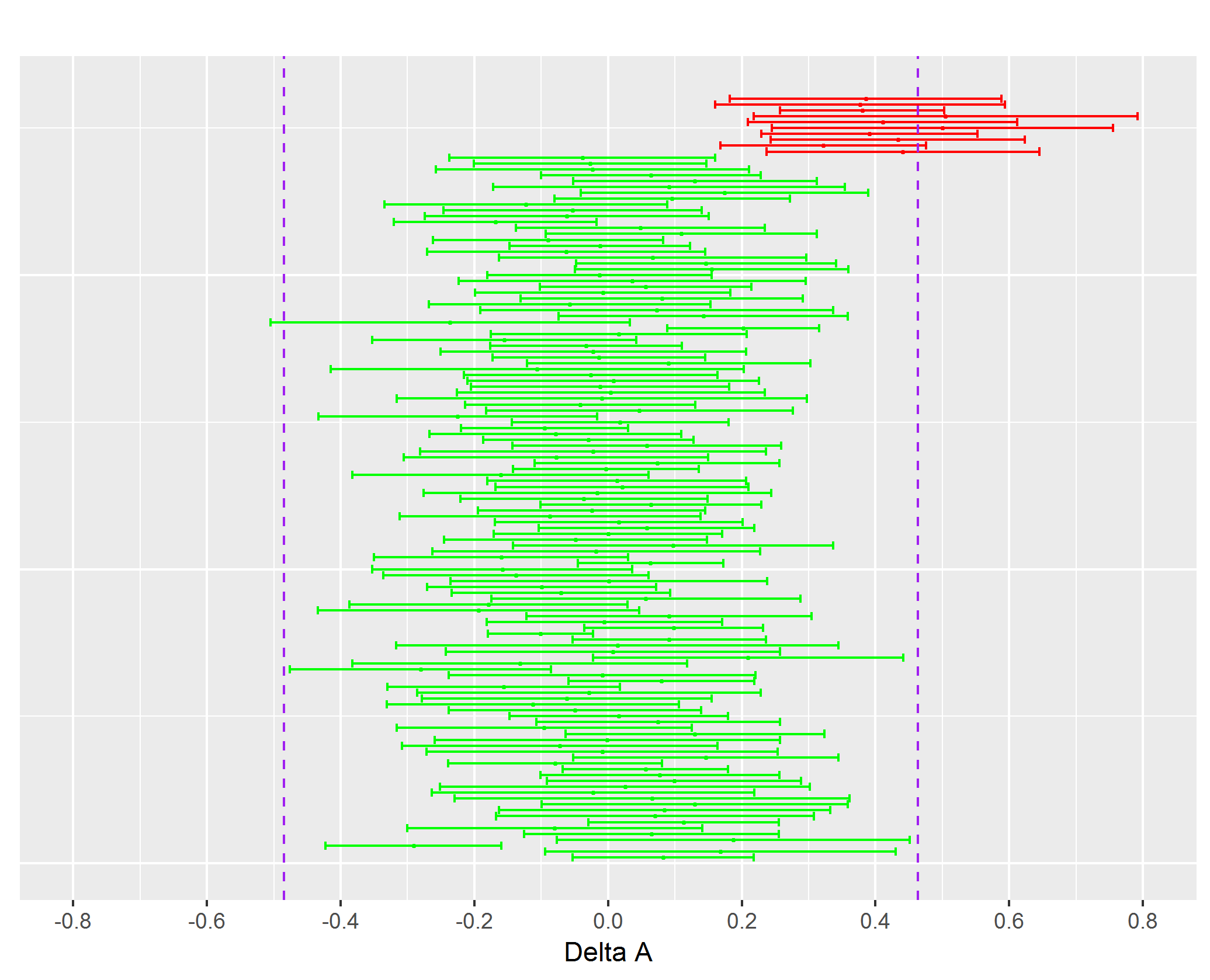 However, the separation between the ΔAs for good and bad test samples may not always be this clear. An example is shown below – here the bad test samples still tend to have higher ΔAs than the good test samples, but it’s impossible to choose a limit for the CI which will allow all the good ones to pass while all the bad ones fail. The best that can be done is a compromise – for example, if the limit is set at 0.30 (as shown in the figure below), 9 of the 10 bad samples fail but so do 24 of the 120 good ones. 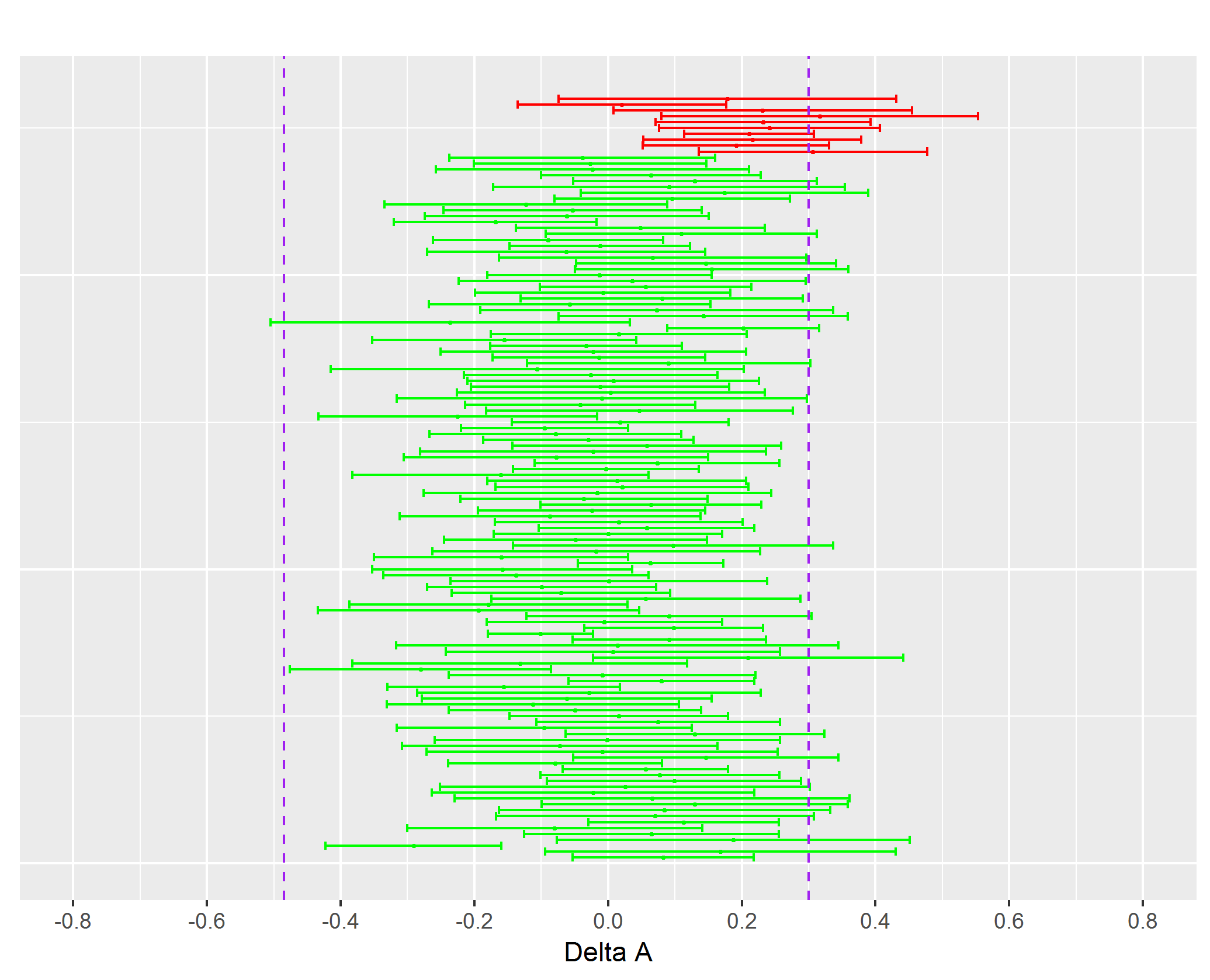 Method “d” has a very different approach to setting the limits. Instead of setting the limits to achieve certain pass and fail rates for good and/or bad data, it instead looks at the consequences of, for example, a lack of parallelism. The limits are set to avoid these consequences becoming too severe. An analogy might be speed limits – these aren’t set by measuring the speed of lots of cars and calculating the 99th percentile, but are (or at least should be!) based on the speed at which the risk and consequences of an accident become excessive.

Anyway, back to bioassays and method “d”.

A specific example where method d could be applied is an assay where for some reason (perhaps an edge effect), one of the test replicates is sometimes a bit low or high. When this happens there will be non-parallelism, and in particular ΔA will be non-zero. The edge effect will also cause a bias in the relative potency. It turns out that when ΔA is negative, the bias is also negative, and vice versa, as shown in the figure below. (This is simulated data – I won’t bore you details of the simulation, but please get in touch if you want to know more. )

A real assay could behave similarly, though the details would be slightly different. 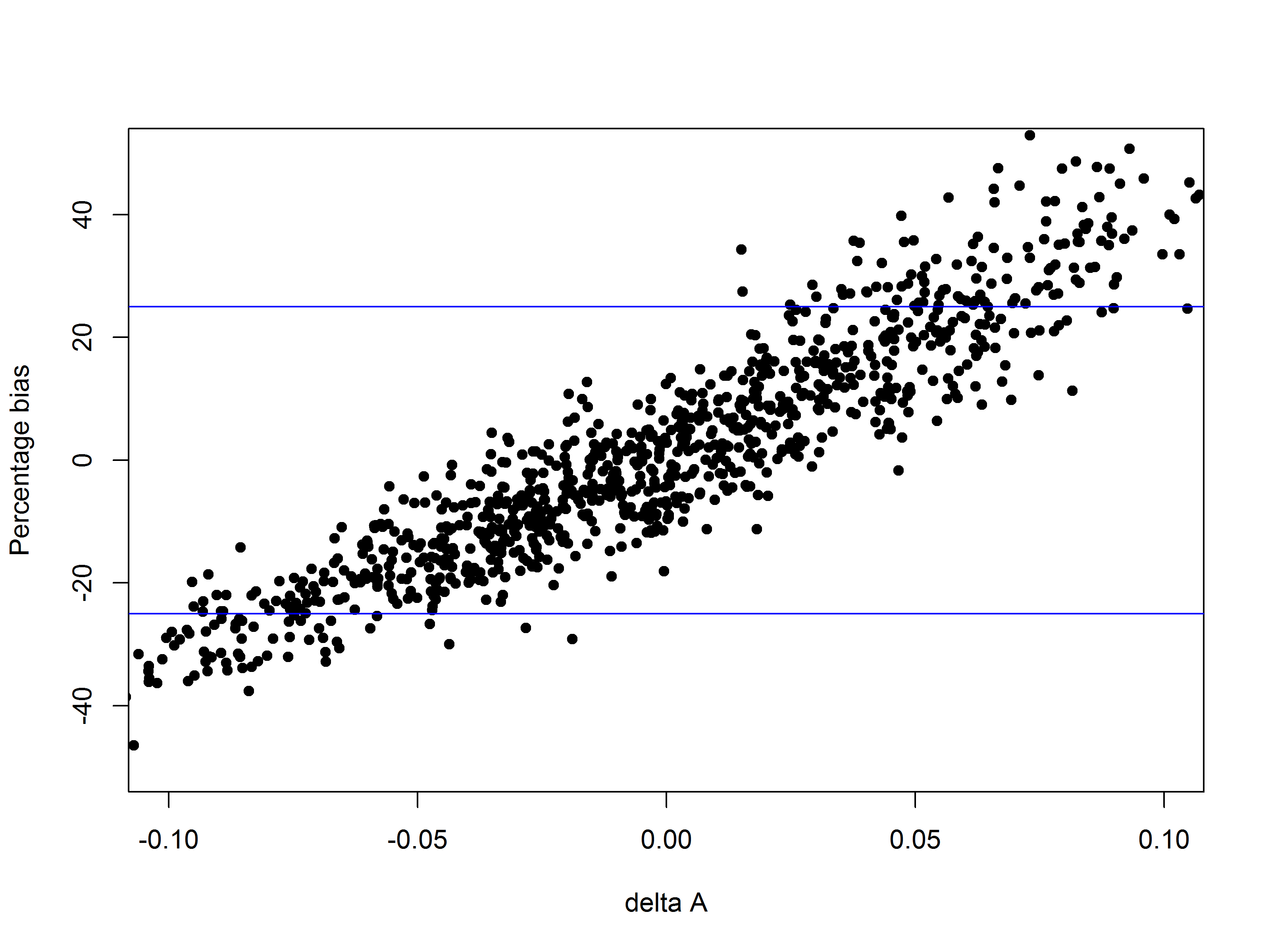 To set limits using method “d” in a situation like this, the first step is to decide how much bias is acceptable. This will depend on the purpose of the assay – e.g. if the assay is for batch release, the bias should be small enough that the chances of it changing the decision on whether to release a batch are small. This in turn will depend on the release criteria and how much batch-to-batch variability there is, so deciding on the maximum acceptable bias requires a good understanding of what the assays is used for and what would happen if it was biased by a certain amount.

OK, suppose we’ve thought carefully about all this and decided that a bias of up to 25% would be OK (this limit is shown by the blue lines above). The next step is to use this to set a limit on ΔA. This is done by using the relationship between the bias and ΔA – large values of ΔA tend to go together with large values of the bias, so if we ensure ΔA is small the bias will be small too. For this example, to restrict the bias to less than 25%, a limit of ± 0.03 on ΔA is about right. This is shown in the figure below – with a limit on ΔA at ± 0.03 (the red lines), only the points shown in black will pass, and almost all of these have a bias of less than 25%. 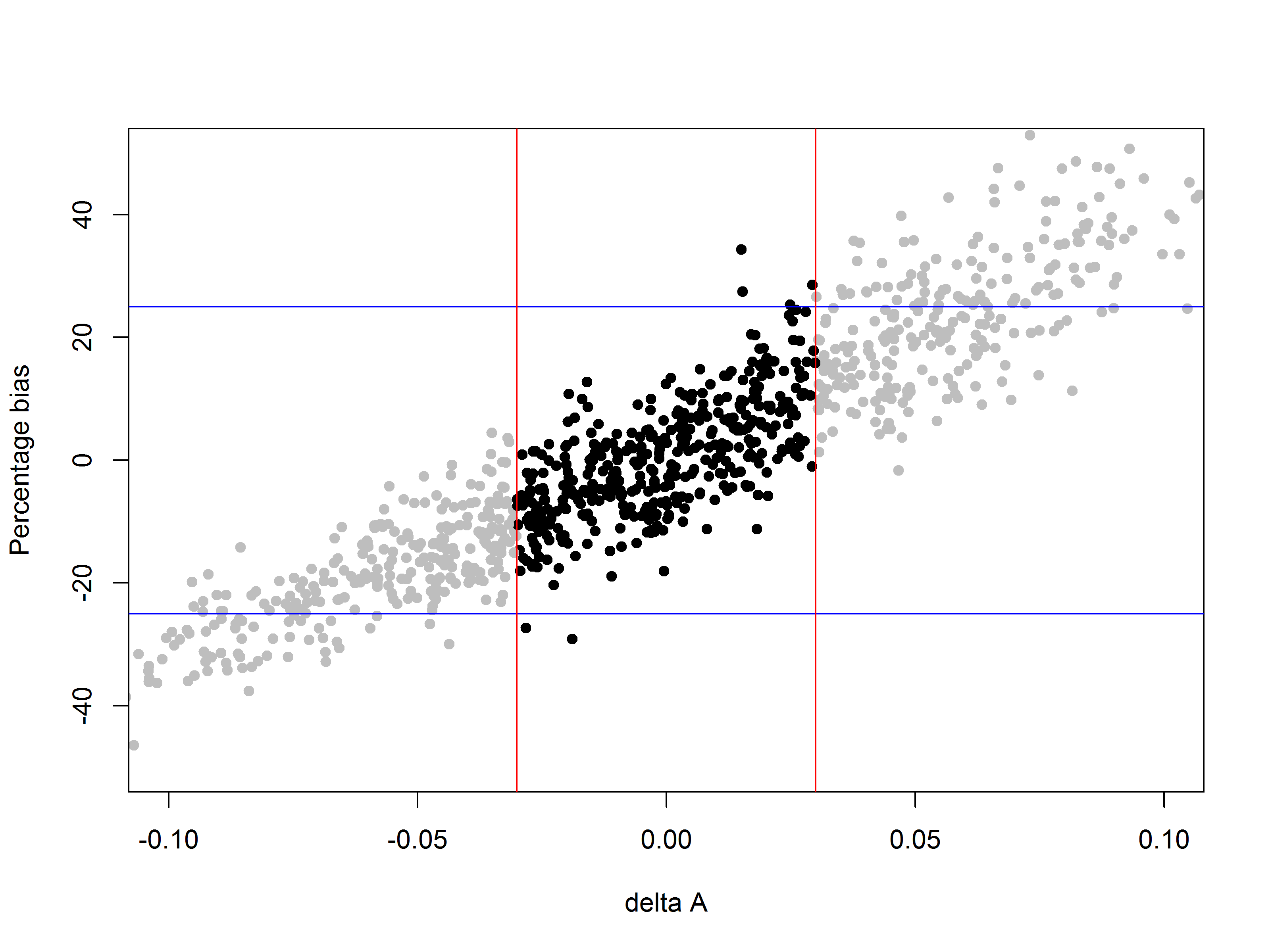 Each of the methods has advantages and disadvantages.

Methods “a” and “b” are the simplest, and can always be used since they only require “good” historical data, which should always be available. However, they may produce limits that don’t actually reject samples or assays that should fail – there is no way of telling since they don’t use “bad” data. Of the two, method “b” is probably better since it also accounts for the uncertainty in the suitability criterion.

Method “c” is also simple to implement, but requires “bad” historical data, from assays or samples that are known to have problems, which may not be available. Even if it is available, it may be difficult to set limits that can reliably discriminate between good and bad assays and samples. But if these obstacles can be overcome, method c is superior to methods “a” and “b” since it will ensure the suitability tests do what they are supposed to do – discriminate between good and bad assays and samples.

Method “d” is the most objective, since it is based on the real-world aim of the assay and makes the limits only as narrow as needed for the assay to achieve this aim. But it is very difficult to use in practice since it needs a detailed understanding of the assay, therefore, it is rarely used.

One final thing to mention is that suitability limits can be revised as more data comes in, if it turns out that the original limits were either too wide or too narrow. The method used to set them can also be changed – for example if method “b” was used initially we would recommend switching to method”c” once data from degraded samples was available.