An Introduction to Survival Analysis for Clinical Trials

In our last blog we discussed Handling Missing Data in Clinical Trials, and mentioned a kind of missing data known as ‘censoring’.  In this blog we focus on techniques for dealing with this, known as ‘Survival Analysis’.

Censoring occurs in time-to-event data (the time from a defined origin until the event of interest), when the event has not been observed (i.e. the time to the event is unknown).  In a clinical trial, the origin might be randomisation or the start of a treatment, and the endpoint of interest might be disease diagnosis, the occurrence of an adverse event, disease progression, or even death. The key attribute of this kind of missing data is that the time to the event is partly known – it is at least as long as the event-free period observed for the subject – in other words, it is censored.  This type of data can be analysed with a set of techniques known as ‘Survival Analysis’ [1].

To illustrate time-to-event data and the application of survival analysis, the well-known lung dataset from the ‘survival’ package in R will be used throughout [2, 3]. This data consists of survival times of 228 patients with advanced lung cancer. The origin is the start of treatment.

Data can be either right, left or interval censored.  In each situation the subject commences the study at a defined time to and the event of interest takes place at to + t. However when t is unknown and the event is only known to have occurred at to + c, the data is censored with a censored time, c.

Right censoring is the most common, occurring when the true event time is greater than the censored time, when c < t.  It often arises when the event of interest has not occurred by the end of study and the subject has been lost to follow-up.

Left censoring is the opposite, occurring when the true event time is less than the censored time, when c > t.

Interval censoring is a combination of left and right censoring, when the event time is known to have occurred between two time points:   c1 < t < c2.

Figure 1 illustrates the recurrence of lung cancer in three patients who received surgery to remove the tumour, indicated by the ‘start of study’, each patient depicting a different type of censoring.

Interval censoring can be observed at point A.  This patient was examined at 3 months following surgery and observed to be disease-free.  When re-examined at 6 months, the cancer returned and thus the actual time of recurrence is only known to have occurred between 3 and 6 months.

Left censoring can be observed at point B.  This patient was examined at 3 months following surgery and the cancer had returned. The patient had not yet been observed disease-free and it is only known that the tumour returned sometime before the 3 month examination.

Right censoring can be observed at point C. This patient reached the end of the study disease-free but was lost to follow-up, therefore the actual time of recurrence is only known to be sometime following the end of study.

Figure 1: Recurrence of a lung cancer following the surgical removal of the tumour (start of study); right, left and interval censored observations. 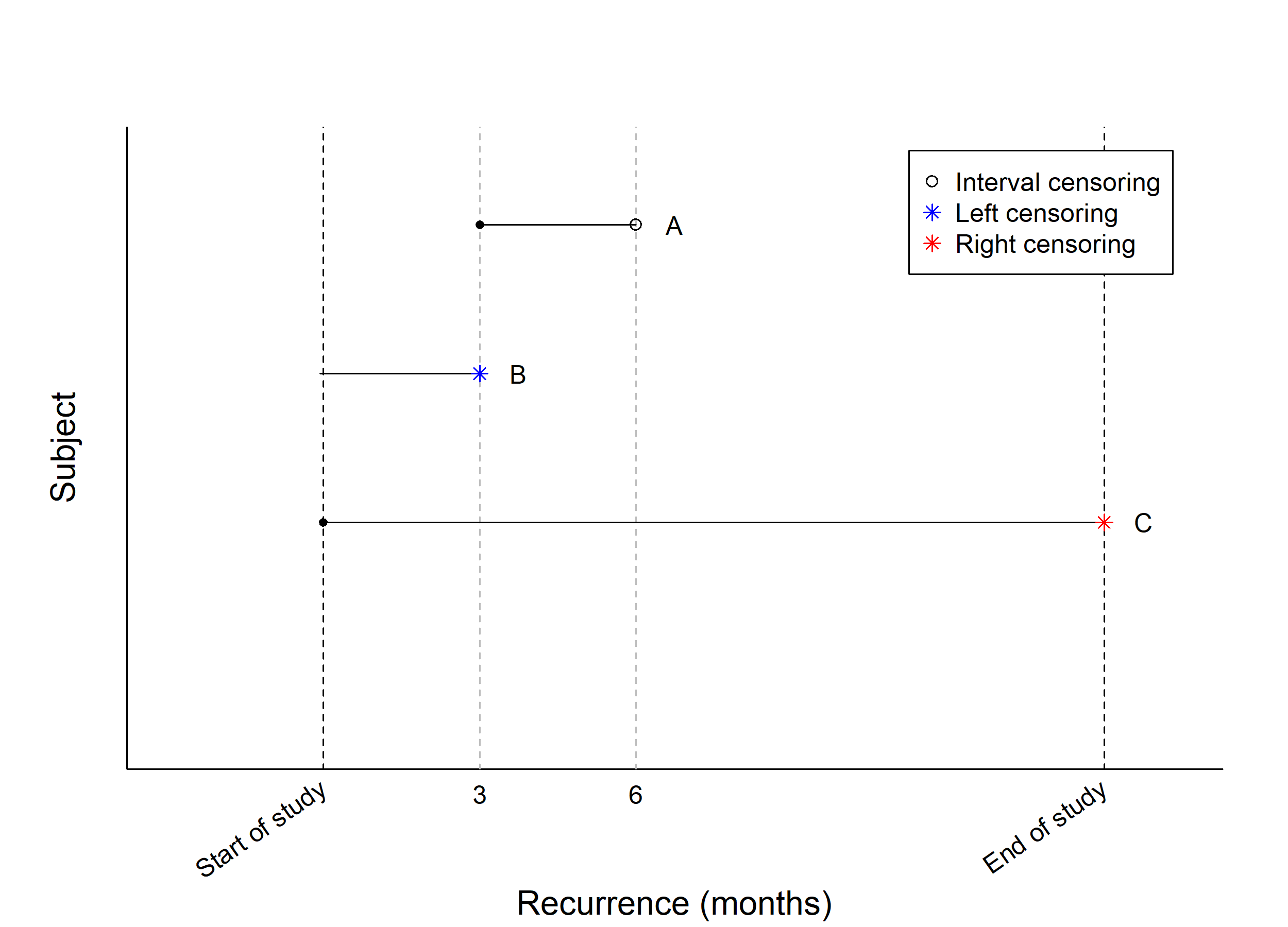 What basic information is required to perform analysis?

The most common type of censoring in clinical studies is right-censoring, and we will focus on this for the remainder of this blog.

For analysis, time-to-event data should consist of two pieces of information for every observation:

With this information, a key function can be used to summarise the data and visualise the distribution of event times – the survival function.

What is the survival function?

The survival function can be defined as the probability that an individual survives past some time t, or similarly the proportion of patients still alive at time t, given by

where t is the actual survival time and T is a continuous random variable.

A widely used method of estimating S(t), and usually one of the initial approaches to  analysing censored survival data, is the Kaplan-Meier estimator.  This is denoted by \( \hat{S}(t)\). In clinical trial research, this estimate is often used to measure the proportion of subjects still alive at specified time points following treatment.  Suppose the observed times of death in the study are t1, t2,…,tk with di deaths occurring at ti and ni patients alive just prior to ti.   Then  \( \hat{S}(t)\)  is estimated by,

(Note that if a patient is censored at a time ti, they are included in ni, but excluded from ni+1.)  The Kaplan-Meier estimate can be visualised through a plot of  versus  known as a Kaplan-Meier curve.

In practice, the ‘survfit’ function in the Survival package in R can be implemented to calculate Kaplan-Meier estimates and other important parameters, and produce the corresponding Kaplan-Meier curve [2].

This ‘survfit’ function was applied to the lung dataset in R. A summary of the resulting Kaplan-Meier estimates at various time points are provided in Table 1 and the Kaplan-Meier plot is provided in Figure 2.

As shown in Table 1, the estimated probability of survival 208 days following treatment is approximately 0.66, i.e. 66% of patients are still alive; 138 patients are still at risk and 1 patient died.  The estimated probability of survival is also shown in Figure 2, where the plot line falls on the intersection of 208 days and overall survival of approximately 0.7.

Figure 2: Kaplan-Meier plot of the Overall Survival of patients with advanced lung cancer

Comparing survival for groups of subjects

In clinical trial research it is often of interest to compare two groups, such as comparing a treatment group to a control group.  The log-rank is a hypothesis test for right censored data, which tests for a difference in the outcome between two groups of individuals.  This test can be carried out using the function ‘survdiff’ in the Survival package in R [2].

The lung dataset was grouped by sex.

The ‘survdiff’ function was applied to the lung data, and the conclusion is that there is a significant difference between male and female treatment groups, with a p-value of 0.0013.

Figure 3: Kaplan-Meier plot of the Overall Survival for male and female patients with advanced lung cancer

Where does this lead?

In addition, it is often important in clinical research to understand the long term effects of a treatment, beyond the time-scale of a clinical trial. This places importance on parametric methods, which can be used to model the available data and extrapolate beyond the end of study, estimating the probability of an outcome over a longer period of time. These methods are common in practice and therefore they will be the topic of discussion in a future blog.